Care Guide for the Blood Parrot Cichlids-The Hybrid With a Tiny Mouth Blood parrot cichlids are super cool, derpy fish that we have previously kept in an 800-gallon aquarium. They are a great choice over …

Blood parrot cichlids are super cool, derpy fish that we have previously kept in an 800-gallon aquarium. They are a great choice over other animals that could be kept in the aquarium. They possess an interesting mix of features – larger size, bright color, and yet a smaller mouth that makes them less likely to damage or eat other fish. As long as you have the tank space and the right kind of food, they are pretty easy to keep.

What are Blood Parrot Cichlids?

This is not the saltwater parrotfish, but rather a freshwater hybrid fish developed in Taiwan from a mix of mostly Central American cichlids. Although there are many theories regarding their lineage, some speculate that they may be:

The average length of a blood parrot is 8 inches (20 cm), which is a bit more than a softball. They love swimming in the middle-levels of the ocean. Their round heads and small, deformed faces give them their common name. They look much like a parrot’s beak.

What types of blood parrots are there? There are many colors to choose from, including blood red, red and yellow, purple, or deep red. The super-sized King Kong parrot, the platinum or snow white parrot, the polar blue parrot and the kirin (or Flowerhorn) parrot cichlid have been created by further mixing blood parrots with other cichlids.

Although blood parrots are usually reddish to yellow in color they can be crossed with other cichlids to produce more variety.

How much do blood parrot cichlids cost? They are more expensive than your average freshwater fish and can range from $15-20 or higher, depending on the variety. You can often find red blood parrots at large pet stores like Petco or PetSmart.

Why does my blood parrot or cichlid turn black? Juveniles are usually paler than adult fish and can have black markings at the beginning. These black spots may appear and disappear throughout their lifetime, but they usually fade as the fish gets bigger and more colorful with age. Try different ways to decrease stress in your fish, such as increasing water quality and reducing aggression.

How to Set Up an Aquarium for Blood Parrots

Unlike many man-made fish, blood parrots are surprisingly robust and can tolerate a wide variety of temperatures from 72-82degF (22-28degC) and pH between 6.5-8.0. We often keep them in planted aquariums because they don’t dig a lot and their mouths are too small to destroy plants. 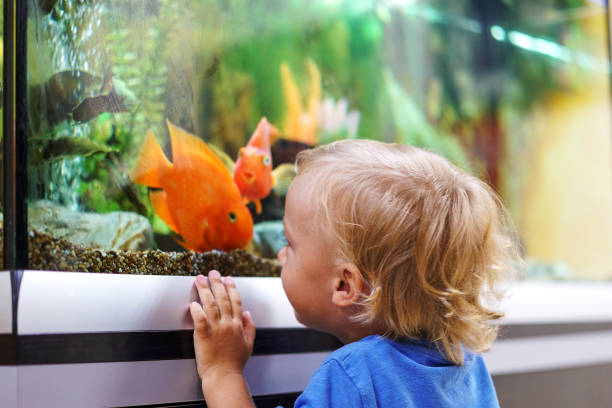 Is it possible for blood parrot cichlids to be aggressive? They can act like a tank boss and climb up on the glass to ask for food. However, their small mouths make them less likely to physically damage or eat tank mates that can’t fit inside. If you notice your blood parrots are being bullies (or are constantly hiding from the main bully), reduce the aggression by placing tall decorations that block line of sight, providing more shelters, adding dither fish, or upgrading the tank size.

What fish can you put with blood parrots? Keep them with other peaceful or semi-aggressive fish that are similar-sized and can live in the same environmental conditions. That means no to guppies, betta fish, or goldfish. Common tank mates for blood parrot cichlids include oscars, angelfish, larger tetras, and of course more blood parrots. We personally have kept them with clown loaches, a Mbu puffer, giraffe catfish, and clouded archerfish.

What do Blood Red Parrots eat?

It is often difficult to find the right foods for blood parrots. Their tiny mouths don’t open and close well so they must carefully align their bodies with the food before swimming forward to “scoop it in”. They may become overwhelmed during mealtimes and need food that is easy to swallow. Therefore, consider feeding baby-sized pellets to the juveniles and feeding mini pellets to larger adults. We find they do best with floating pellets because then the cichlids can come up from underneath the food and then gravity helps the granules to fall inside. Foods specifically made for blood parrots, like Hikari Blood Red Parrot+, have the added benefit of containing color-enhancing ingredients to boost their redness. Their tiny, triangle-shaped mouths are more conducive for scooping in food, rather than taking bites.

How do Blood Parrot Cichlids Reproduce?

Hobbyists have never been able produce reliable blood parrots at their home because the males are infertile. This does not stop them from trying though, so you may see the female lay her eggs on a flat surface and then both parents will guard them from would-be predators. Although females can be crossed to other Central American cichlids of similar size, the offspring are not likely to look or display the same beautiful colors as blood red parrots.

We realize that man-made hybrids are not everyone’s cup of tea, but they are an attractive choice if you want to make a larger community tank with aquarium plants. While we do not ship fish, you can visit our preferred online vendors to find the perfect parrot cichlid for you.

How to Choose The Right Aquarium Heater

New Fish Checklist: how to Set up A Fish Tank